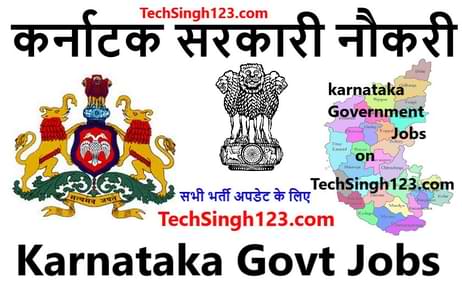 Karnataka is an Indian state located in the south of India, also known as Karnataka. Its capital is Bangalore. Karnataka has an area of 1,91,976 square kilometers. Which is 5.83% of the total geographical area of India. It is the eighth largest state in the country in terms of area. This state was formed on 1 November 1956 under state reorganization. Earlier it was called Mysore State.It was renamed Karnataka in 1973.

It shares its borders with Maharashtra in the north, Andhra Pradesh in the east, Kerala in the south, Arabian Sea in the west, Goa in the north-west and Tamil Nadu in the southeast. The most spoken language here is Kannada.

Who all are eligible to apply for Karnataka Govt Jobs?

There are various boards in Karanataka Government provides job opportunities based on their requirement. Each board has its eligibility criteria; the aspirants who meet the eligibility criteria provided by the recruitment board of Karnataka are eligible to apply for Karnataka Sarkari Jobs.

Is there any Government Job in Karnataka without an exam?

Why not, many boards in Karnataka recruits aspirants only with the educational qualification. By completing the direct interview and document verification, applicants can step their career in the Karnataka government sector. Ex: GDS, Driver, Security, Pum Operator, Clerk Assistant, Technician, etc

What information users will get from our Karnataka Govt Jobs page?

From TechSingh123.com here, the aspirants will get the latest updates of Karnataka Government Jobs in 2021 for free. Besides, we also share details of Board Name, Post Name, Vacancy, Last Date, and Direct Apply Link for all Karnataka recruitments.

How to Apply for Karnataka Govt Jobs 2022?